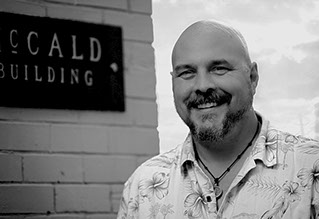 We are thrilled to welcome Producer Mark Axton to our team. Mark will be working directly with Hinge leadership, creative leads and technical directors to streamline and grow the development of our commercial, branded and experiential (AR/VR) content divisions.

Mark has spent more than 30 years in the commercial and entertainment production industries. From industrial videos to animated features, and from LA to San Francisco to Portland, Mark has produced nearly every type of media project imaginable.

Before arriving in Portland Mark worked for such industry giants as Amblin Entertainment, Universal Cartoon Studios, Boss Film Studios, Dreamquest, Pixar and PDI. Mark moved to Portland in 2000 to work at Will Vinton Studios, and since then has worked with many local production companies, including Bent Image Lab, Funnelbox and Dawson Media Group.

Mark has worked on countless television and web commercials for clients such as Kellogg, Proctor and Gamble, Airwick, Cox Communications and Gillette. His feature film credits include The Mask, The Crow, Turbulence, Multiplicity, Starship Troopers, Air Force One, Shrek and Toy Story 2.

Mark is a semi-professional pirate, an ordained minister and an amateur bartender. He currently lives in St. Johns with his wife (a mermaid, of course), stepdaughter, two insane cats and a slightly unbalanced blue and gold macaw.