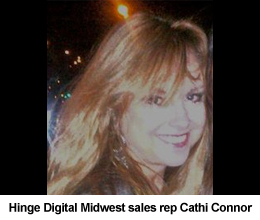 Portland-based Hinge Digital signs Cathi Connor as their Midwest representative. Connor is a life-long Chicago resident, with the exception of the two and half years she spent living in Italy. While there, she became immersed in the film production world as an actress. Connor was hooked, not on acting but on the commercial film production process. She knew that her future was to be an integral part of that world. Upon returning to the U.S., Connor began her career as an Independent Commercial Production Representative.

In the 20 years since that time, Connor has represented some of the most talented directors, editors, f/x artists, animators, and compositors in the world. “We are excited to have Cathi representing Hinge Digital to our clients in the Midwest,” said Roland Gauthier, studio EP and founder. “Her agency relationships, keen understanding of advertising and film make her a perfect fit for Hinge.

Connor adds Hinge Digital to a very strong roster of companies that include Shilo, Ntropic, Curious Pictures and many more. “I don’t see myself as a ‘rep’, but as a problem solver who assists clients in finding the right talent for their project,” Connor said.

“Cathi is a wonderful person, and I really enjoy collaborating with her. Her experience, connections, and down to earth demeanor make her a great addition to our team,” notes Ramiro Gomez, the studio’s Head of Business Development. “I am thrilled to have her join the Hinge Digital family.”

Connor concluded, “I’m thrilled to be working with the amazing creative minds at Hinge Digital at this exciting juncture of growth for the company.”