Hinge founder and Executive Producer Roland Gauthier talks to 3dtotal about working with Adult Swim, making VR about more than novelty and why Substance Painter is the tool you’ve been dreaming of…

Hinge’s EP, Roland Gauthier, was interviewed by 3dtotal.com to get a glimpse into our studio culture & production tools, working on Toonami, and making meaningful VR experiences. Check out the full article here and an excerpt below.

Located in beautiful Portland, Oregon, Hinge is a creative design studio that specializes in bringing stories to life through characters, live action, 2D/CG animation and post-production visual effects. Boasting pedigrees from LAIKA, Disney, and Sony Pictures Imageworks, the company’s three founding members have tried to bring the big studio experience and capabilities to a “nimble and approachable creative studio” 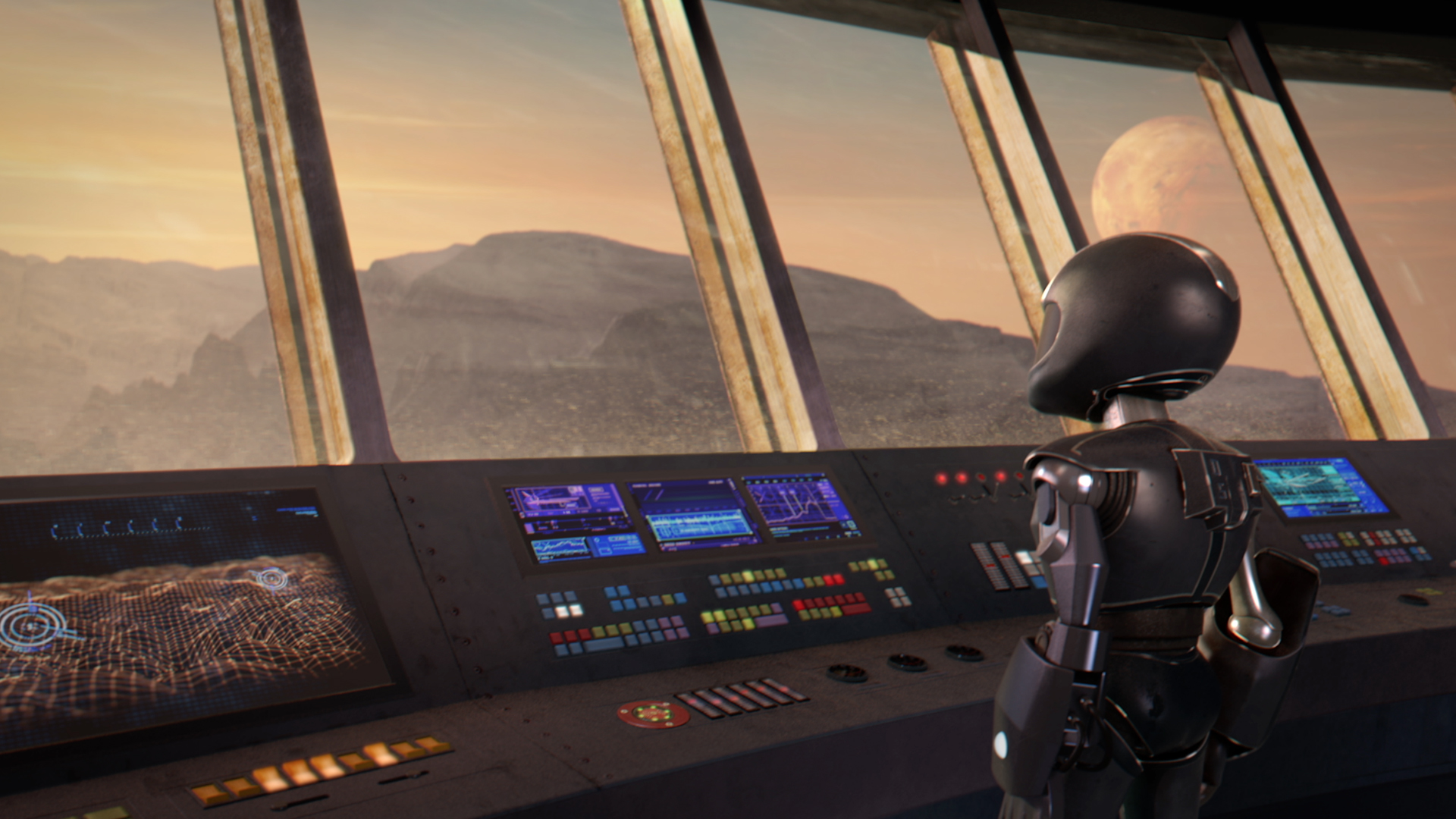 At the core of Hinge’s eight year history is a team of versatile artists and CG makers that make the studio run smoothly. Modelers also rig; lighters develop shaders and textures; animators animate in 3D, 2D motion graphics and traditional 2D. It’s through this multidisciplinary approach that Hinge is able to cultivate and manage such a diverse portfolio of different work.

The company also relies on a substantial roster of go-to directors for their live action work. and has established relationships with directors from across the US in addition to the local community of creators in Portland. They’re even lucky enough to have an Art Director who “extends his creative talents to cooking gourmet food for the whole team on Thursday mornings!” – So you’d better crack out the recipe books if you’d like a job at Hinge!

One of Hinge’s most high profile projects is their work on Intruder, for Adult Swim’s show Toonami. This is the third season Hinge has worked on Toonami, and Executive producer Roland Gautheir describes it as the “the ideal creative partnership.”

“Adult Swim is very collaborative, they know their fans and clearly they love what they do. They provide the script, budget, audio and the voice talent, and they say, ‘make something cool!’ We take it from there.”

The team at Hinge takes the brief and goes from there, creating storyboards and designs for the new featured characters in environments. Then they go on to do asset development and animation pre-vis into full animation, visual effects, lighting and compositing. Naturally they are dab hands at it now, but the challenges aren’t all technical. Hinge is tasked with taking beloved characters, TOM and SARA, and creating new worlds, new adventures and dangers for them to face and overcome.

“The biggest challenge is measuring up to the high expectations of the Toonami Faithful, their loyal fan base!” 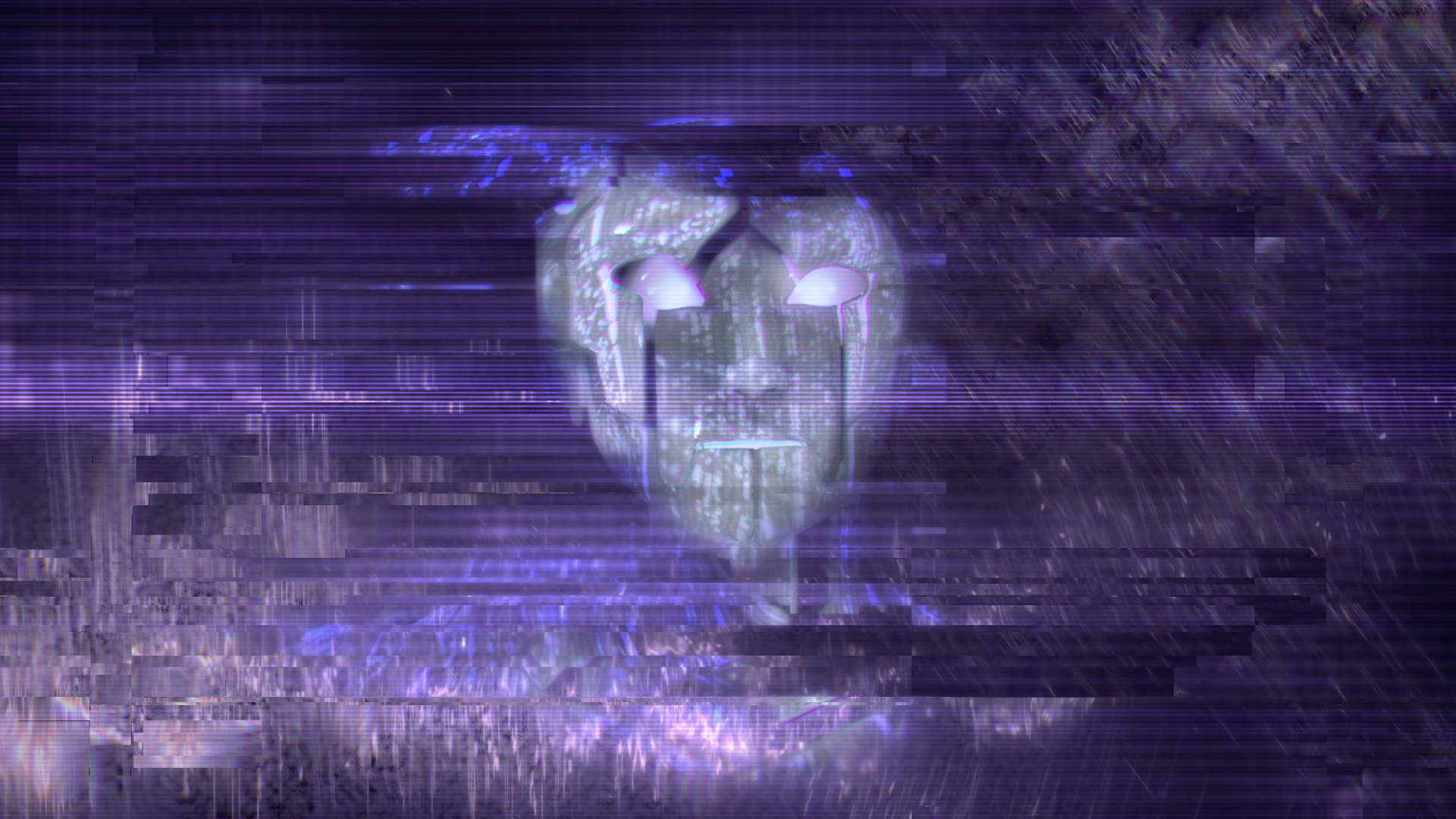 Among the many interests that Hinge has fostered, VR has become an essential part of the company’s DNA. Gauthier believes the fully immersive VR experience is a great addition to the company’s arsenal of capabilities, and it has a big advantage over the traditional video experience.

“VR is a unique gateway to pure creativity and inspiration. Instead of just observing a story from the outside, you can live in it and experience it firsthand. It’s very powerful.”

Like many VFX studios Hinge sees VR as a natural progression, allowing them to leverage their strengths in CG design and execution. However, Gauthier stresses that VR also introduces new opportunities for user interaction and storytelling. 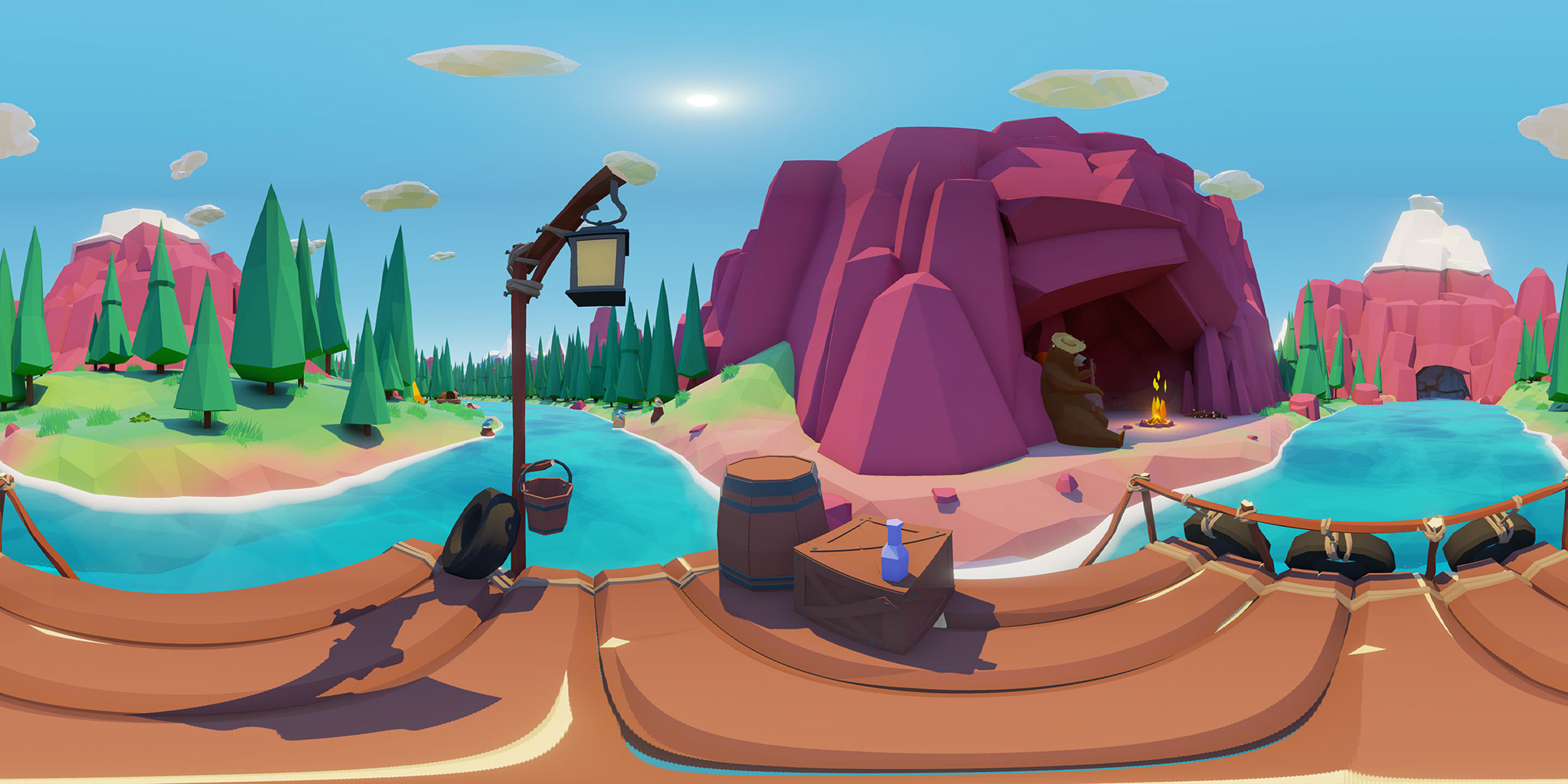 “People want to explore and interact with everything they see in VR: to pick thing up and throw objects to see what they will do. Interactivity design and testing are crucial to craft a great experience.”

Of course, in order to build these vast new experiences Hinge has had to compose a new set of tools. Often combining established techniques from the game, commercial and film/tv toolsets and adapting the latest technologies into their projects. Gauthier admits that “it’s still a bit of the Wild West, as the software and hardware are constantly changing and evolving”

It’s clear the market for VR, both in consumer and commercial applications, has blossomed very rapidly in the last few years. Google, Samsung, Playstation, Oculus and Vive are all pushing VR hard and helping smaller developers offset some of the costs. Gauthier is eager to out that Hinge is right at the centre of that push.

“Leveraging a rapidly emerging technology is one thing, but tapping into deeper currents of science, strategy and psychology in support of that technology is another” 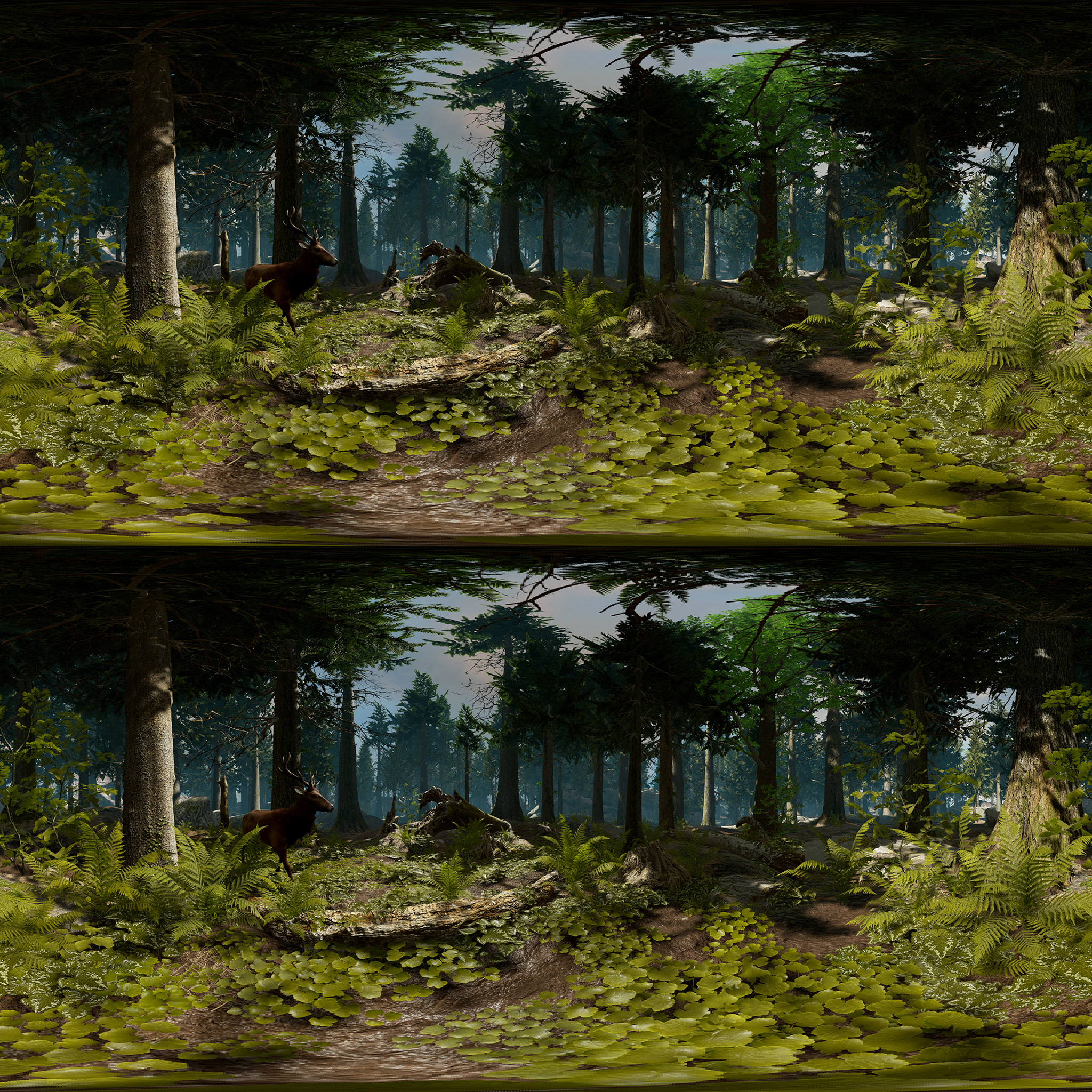 Regardless of the innumerable challenges that companies like Hinge are facing with VR, it seems that the company has a handle, not only on the technical aspects of the technology, but on directing the more affective capabilities of VR and focusing that energy into more poignant experiences.

“In the end, it’s all about the story and the emotional connection.”

Substance Painter has exploded onto the CG and VFX industries in recent years and Hinge has been quick to adopt and adapt the technology for its numerous purposes. Gauthier is quick to extol Substance Painter’s virtues, stating that “team members were able to pick it up functionally use within a day.” An obvious boon for any artist or studio looking to expand their toolset without interrupting its workflow too much. 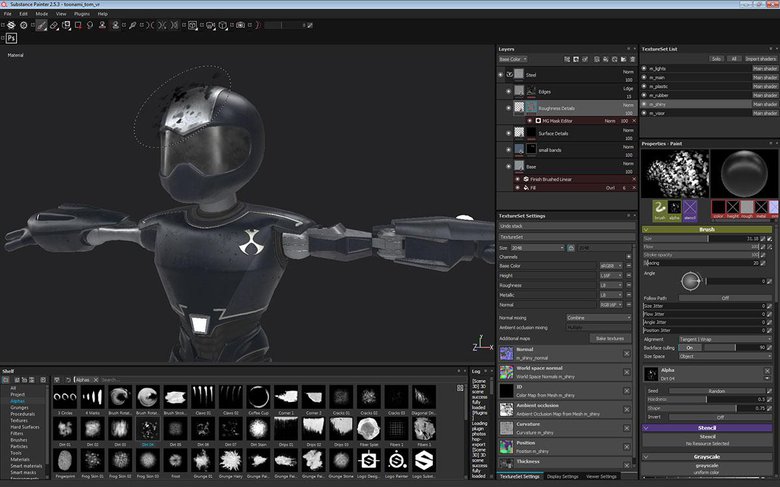 “Substance Painter has proven to be a great addition to our workflow. It allows us to maintain accurate look throughout our entire production. It’s also fast, allowing our artists to spend more of their time on creative design work than on the mechanics of texture workflow.”

In addition to a boost in efficiency and speed, the myriad uses for the tech, such as procedural masking for hard surface texturing, real-time texture application with lighting simulation, great organization of UDIM tiling and built-in export settings for VRay make it a crucial tool for an industry leading studio.

“We are now using Substance Painter in all aspects of our pipeline. It provides a great foundation for textures on nearly all assets… We could not imagine using another program for nearly all texturing needs at this point.” 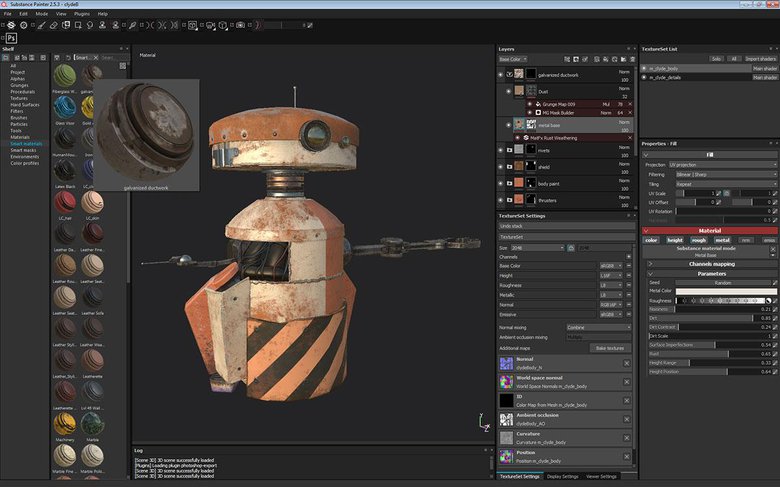 It All Hinges Here

Now in their eighth year, Hinge has big plans before its tenth birthday. They continue to foster those essential relationships with partners and clients such as Adult Swim (which recently commissioned a collaboration between Hinge and Titmouse, for Toonam’s 20th anniversary.)

“Seeing what we have already accomplished with them over the years is very satisfying. We can’t wait to start crafting TOM and SARA’s next adventures!”

With one foot still firmly planted in its core areas of expertise, the studio is constantly looking toward the horizon. Currently, Gauthier states, the team is “working on flexing the boundaries of the typical VR experience” and is excited to be engaging in the community at VR and HoloLens meet ups, conferences and film festivals, both in Portland and at large. There’s little doubt we’ll be hearing even more exciting stuff from Hinge very soon!