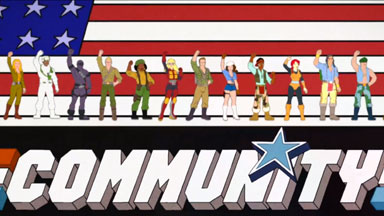 Hinge Digital was tapped by SBI Media to provide animation services for NBC’s much anticipated animated episode of Community. The live-action sitcom, now in it’s 5th season, is no stranger to animation – having produced several experimental episodes including a stop-motion Christmas episode and one in the style of an 8-bit video game. SBI Producer, Trever Stewart says “with Portland’s rich animation history and Hinge Digital’s reputation for providing world-class animation, it was truly a convenience to have such a resource so close to Los Angeles.”

Counting many fans of the show in its ranks, Hinge was thrilled to work with the creative geniuses of Community on this animated episode. Over the course of several intense weeks, the 2D animation team worked feverishly in Adobe Flash to animate the iconic Intro and PSA, creating over a minute and a half of G.I. Joe style animation. Hinge EP, Roland Gauthier says, “It was awesome working on the G.I. Joe episode with Trever and the rest of the team at SBI Media. It is not often you have the chance to breath new creative life into an animated series from your childhood. The result looked great and was hilarious!”

Creative Collaboration When We Can't Be Together. We all need to keep producing great creative while staying healthy and safe. Hinge is here to help. #animation #vfx #production #workingremotely mailchi.mp/4d52ee464… pic.twitter.com/BXh9…

@Blizzard_Ent and @HingeDigital teamed up to reimagine the battle of Arthas vs Illidan, remaster classic game #cinematics and create new game loading screen animations for Warcraft 3 Reforged. It was an awesome collaboration. ⚔️ hellohinge.com/proje… pic.twitter.com/seAy…

Ever seen a 50-ft Raven land on the goal posts? Another view of our mixed reality Raven 👀 pic.twitter.com/68mj…

Did you know @Blizzard_Ent and @HingeDigital teamed up to reimagine the epic battle between Arthas and Illidan for Warcraft III: Reforged? Check out the first 30 second teaser unveiled at #BlizzCon2019 ! We can't wait to play it. pic.twitter.com/uKCx…

@adultswim and @HingeDigital teamed up for another great year of #Toonami. In 2019, we produced 6 episodes and over 22 minutes of action-packed CG adventures. We explored the origins of TOM and the dangers lurking in the cavernous forge! hellohinge.com/proje… pic.twitter.com/zfpu…

Hinge teamed up with OHSU Doernbecher Children's Hospital to help a family in need enjoy a wonderful holiday season. Every year families in need with children receiving treatment from @OHSUDoernbecher can be adopted. Happy Holidays and new year! pic.twitter.com/mddI…